Amarnath is one of the most famous of Hindu temples, dedicated to Lord Shiva, located in Jammu and Kashmir, Republic of India. The temple is reported to be around 5000 years old and is a popular pilgrimage destination for Hindus - about 400,000 people visit during the 45 day season around the festival of Shravani Mela in July-August, coinciding with the Hindu holy month of Shravan. Inside the Amarnath Cave lies the ice Shiva Linga (along with two other ice formations representing Ganesh and Parvati) a natural formation of an ice stalagmite in the form of lingam. This lingam, of Shiva is said to grow and shrink with the phases of the moon, reaching it's height during the summer festival. According to Hindu mythology, this is the cave where Lord Shiva told about the secret of Life and eternity to His divine consort Parvati, and hence this shrine holds a very special value to the Hindus. The cave is situated at an height of 3888 m about 141 km from the Kashmir's capital city of Srinagar. The area is under the control of the Indian Army due to terrorism threats and hence prior permission is needed from the government before making the pilgrimage. Devotees generally take the 45 km piligrimmage on foot from town of Pahalgam, about 96 km from Srinagar, and cover the journey in 4 to 5 days. There are two alternate routes to the temple, one the more traditional and the longer path from Srinagar and the other a shorter route from the town of Baltal. Some devotees, particularly the old, also use horse-back riding to make the journey. 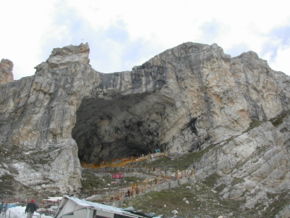